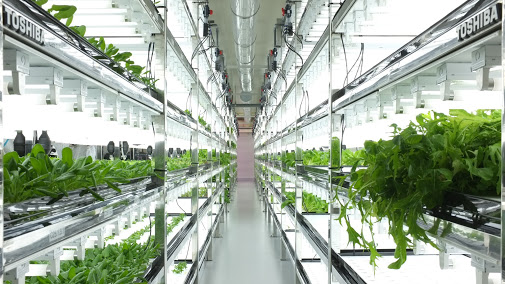 Imagine a 25,000 square foot factory farm that produces 10,000 heads of lettuce per day. Shigeharu Shimamura’s indoor farm in Japan boasts of being the largest of its kind in the world.

Indoor farms consume less water than outdoor farms as they do not lose water by percolation into the soil. This cuts food waste as well. Nor are indoor crops threatened by pests or inclement weather.

The indoor farm uses vertically-stacked racks in a pest-free environment using LED lights. A conventional agricultural setting results in more than 30% of lettuce being wasted whereas Shimamura boasts of only 3% wastage. That’s a big deal, with over 1.4 billion tons of global food wastage every year. Shimamura and his Mira Company plan to set up indoor farming factories in Hong Kong and Russia to support food production on a global scale.

In early 2014, a unit of Japan’s famous Panasonic Corp started growing ten types of vegetables in one of its factory buildings in Singapore. It currently sells its output, which includes lettuce, mini-radishes and baby spinach, to a chain of Japanese restaurants in Singapore. But by March 2017 it plans to grow 30 varieties of vegetables and account for 5 per cent of Singapore’s vegetable production. Fujitsu and Sharp are also experimenting with indoor farming in Japan and Dubai respectively.

This is the need of time as the land for cultivation is shrinking every day. Population growth is not under control. Indian Government is providing big subsidy and loan facility on this type of project. The only problem in our place is power.

There are many reason human had created to eradicate his presence on this planet. Few of them are Nuclear Bomb, Population, Sactorial Violence, Ecological disturbance due to Green House effect, Mismanagement of water resources, Reduction of forest and increasing Industrialization. We are used to comfort of physical material that is destroying the balance in nature. We get Air and Water free from nature. For food we have to work although it was also free before human mind development. He had learned the art of accumulation because of greed. Water is also becoming scare for population in many countries. It is feared that next big war is possible due to water. Air is already polluted human is getting many sickness due to this. The way the population is increasing there is food shortage in the world. According to UN nearly 664 million people will not get food in 2009. Food grain stock has reduce in the world 10 crore 70 lack tone last year to 19 crore 70 lack tone in 2001. World two big producers China 50 crore tones and India 21 crore 50-lack tone are sitting on their buffer stock.

Basically India is a country of farmers, 64% population lives in village and depend on farming for living. If you see the price index of last 40 years one can understand the horrible condition of the farmers in India. Diesel Pisa 0. 95/liter to Rs.60, Petrol Rs.2.0 to Rs. 80.00/liter, Kerosene Paisa0.50 to Rs.30/liter, LPG Rs.40.0 to 450/slander, Cement Rs. 8.0 to 450/bag, Electricity Pisa 0.50/unit to 5.0/unit, and Gold Rs. 200.0 to 31000.0/10gram and see the value of farmers goods Wheat Rs.350.0 to Rs. 1000.0/quintal, Rice Rs. 600.0 to Rs. 1500/quintal, Sugarcane Rs. 500.0 to Rs.2000.0/quintal, Jawar Rs. 300.0 to Rs. 1000.0/quintal. This shows a big dissimilarity and reason of poor condition of farmer. Another joke with farmer is low wages for labor was Rs. 5.0 has reached to Rs. 150.0 a day. Every government elected in India will win on the vote of farmers. But farmers are not united in India so all the government does not take care for the welfare of them. In last 66 year of independence politician have divided the farmer in cast, region and sect and he is not even able to fight for his right. Leaders like Sardar Ballabh Bhai Patel, Lal Bahadur Shaahtri, Charan Singh and Mahaveer Tyagi are no more there to fight for them. But exploiters like Ajeet Singh, Mulayam Yadav, Lalu Yadav, Mayawati, Bhajanlal, Nitish, Patnaik or Mamta etc. are mushrooming all over India. At least first time in July 2000 under the government of Prime Minister Atal Bihari Bajpayee of BJP coalition they have passed the bill of Agriculture Policy. But still till 2014 there is no proper implementation.

Every thing connected to Agriculture.